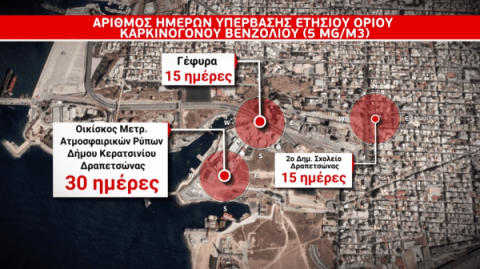 Parents and even more so grandparents of students of Drapetsona's Second Primary School - at the junction of Georgiou Afara and Eleftherios Venizos Streets - may not be aware of methanethiol (methyl-merkaptani in Greek) but they can certainly recognise the odour in the air that they breathe.

"It is similar to the odour of a rotten lettuce," a National Centre for Sciencific Research "Demokritos" researcher said.

The data on the 'pollution party'

Methanethiol belongs to the family of methanethiols that are "constituents of natural gas and have a strong, unpleasant odour."

The same stands true for sec-butyl mercaptan, which is noted on page 25 of a recent document produced through the P.3 (Pi three) project by the researchers of EKEFE Dimokritos on behalf of the Attica prefecture.

It is entitled "The Quality of the Environment as Determined by Specialised Chemical Analyses and the Use of Computational Tools on the Simulation of the Spread of Pollution and the Contribution of the Sources of Pollution to the Broader Region of the Municipalities of Drapetsona-Keratsini and Elefsina" It displayed the "highest levels of odiferous days."

Those odiferous days - to use a polite expression - are routine for the neighborhoods of Drapetsona and Keratsini where Demokritos conducted its scientific research (at five stations in Drapetson-Keratsini including the Second Primary School of Drapetsona) between February and October, 2019, and where the pollution party was set up.

Investigators are aware of both the data and all that they represent for the impact on the environment and the safety of its citizens.

They note indicatively that, "Meracaptans are a constituent element of natural gas and have an unpleasant odour....