The Accused Vasil Bozhkov: I Have Photos, Records and Witnesses for 60 Million Given to PM Borissov and Minister Goranov 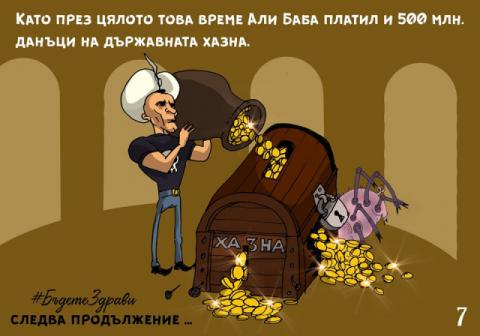 On Friday the investigative news site bivol.bg reported that the Prosecutor's Office had received official information detailing Vassil Bozhkov's claims he had given millions to PM Boyko Borissov and Finance Minister Vladislav Gouranov. The money would provide political protection, as well as keep a favorable law untouched.

Bozhkov owned the largest private lottery before the ruling GERB passed a law, making lotteries a state monopoly in December 2019. The Prosecutor's Office followed with about a dozen charges of extortion, tax fraud and a number of others. Bozhkov's offices were raided and his antique collection confiscated. He is currently residing in Dubai, from where he has been sharing pieces of information via social media, regarding his relationship with high ranking officials and alleging he paid certain individuals at the very top of the executive branch a 'comfort fee'.

Bozhkov says he has given over 60 million leva to Boyko Borissov and Vladislav Gouranov in the period between 2017 and late 2019 on their personal and direct requests. He claims he is ready to back his claims with evidence, including recordings, witnesses, and documentation.

Fiday night PM Boyko Borissov gave two interviews to bTV and the Bulgarian National Television, where he rejected the claims entirely. He said he has not taken a penny from the 60 million Bozhkov refers to. In a rather dramatic answer, he swore on his life, later - on the life of his grandchildren. But, he made a curious distinction:

"If anybody dared take money from [Vassil Bozhkov] - I neither know, nor has anybody told me about it. About ...