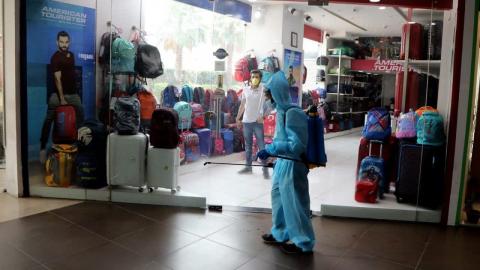 Some Balkan and Central European countries are facing the risk of a second big wave of COVID-19 cases after lifting restrictive measures imposed to curb the pandemic - some say prematurely.

Moldova has registered the most worrying situation in the region regarding COVID-19, with new records being set almost every week in terms of infections, following the lifting of restrictions and a general failure of the public to follow medical recommendations and maintain social distancing.

Both President Igor Dodon and the Prime Minister, Ion Chicu, have remained virtually silent on the subject, though one former health minister has not.

"You don't have to be an epidemiologist, a virologist or even a doctor to understand that the situation has got out of control," former health minister Ala Nemerenco wrote on Sunday on Facebook.

In the last seven days, the country reported 1,449 new cases, averaging 207 per day. The country is getting close to almost 10,000 cases in total. Moldova also has one of the highest rates of infection among medical staff in the world, with 1,777 health staff infected.

North Macedonia is another country in the region struggling to curb the infection rate. Following a second rapid rise in COVID-19 cases, much of the country at the weekend was subjected to another tough 80-hour curfew.

The full 80-hour lockdown was ordered in the capital, Skopje, and the towns of Tetovo, Kumanovo and Stip, as well as in several rural municipalities that are now the new hotspots.

With the number of infections remaining stubbornly high, the authorities are considering reimposing daily evening curfews in the most critical areas.

UK Couple Inspired to Aid Abandoned Moldovan Children
More than 46,000 people cross the Danube by ferry between Romania and Ukraine, at Isaccea

Bulgaria Takes over Rotating Presidency of SEDM Process
Iohannis: I have invited Estonia to join the Euro-Atlantic Resilience Centre

BIRN Fact-check: Aid Offers and Counter-Offers in a Moldovan Election