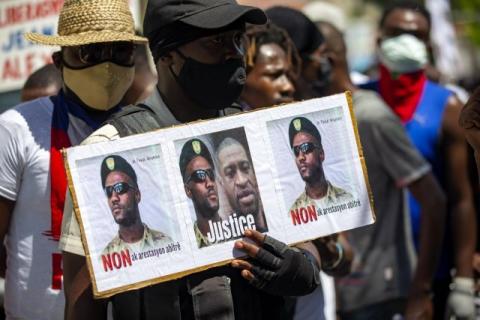 Floyd is just one of many U.S. citizens who die each year during police action, and statistics show that U.S. police shoot, arrest, and imprison more people than in other developed countries.
Among the members of the G7 developed countries, the United States stands out in terms of death during contact with police officers, while black people are the most affected by this type of violence, CNN reports.
Thus, there are twice as many deaths during and after apprehension in the United States than in Australia, and six times more than in Great Britain (in the proportion of arrests and deaths).
According to the US Bureau of Justice Statistics (BJS), from June 2015 to March 2016, 1.348 such deaths were recorded, which would mean that 135 such killings occur within a month, or just over 4 per day.
For the sake of comparison, only 13 people died in the UK during a similar period during a police intervention.

The most affected citizens are black AP Photo/Frank Augstein

U.S. citizens are more likely to be arrested or detained than their peers around the world.
In 2018, 10.310.960 people were arrested in that country, i.e. every 32nd citizen.
Black people make up a third of the U.S. population in prison despite making up only one-eighth of the country's total population.
According to a 2016 study published in the scientific journal American Journal of Public Health (AJPH), police officers more often use force against black Americans.