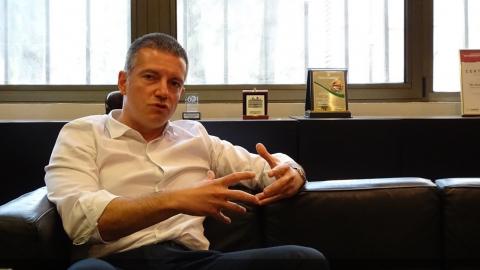 Changes to the national broadcaster, Macedonian Radio and Television, MRT, and to the institution that regulates the electronic media, the Agency for Audio and Audio-visual Services, AVMU, were key stated priorities for the Social Democrats.

Legal changes were indeed made, but for more than a year the election of new, presumably independent members of the MRT's Program Council, and of the Council of AVMU, have been stuck.

Meanwhile, the old MRT Council, which was accused of political servility to Gruevski's government, is still operational, even though its term has expired. It even managed to re-elect the old MRT head, Marjan Cvetkovski, originally elected in 2012, and appoint a new supervisory board.

Mancevski said the opposition was to blame for the blockade, in particular blaming the head of the parliamentary committee in charge of appointment of new members, VMRO DPMNE MP Ilija Dimovski. He said he had repeatedly failed to call a committee meeting.

"We have tried speaking with Dimovski, I and other MPs, but we could not reach an agreement," he said.

"VMRO DPMNE demanded a clear party bargain. They were saying: 'Let [Social Democrat leader Zoran] Zaev and [VMRO DPMNE head Hristijan] Mickoski, agree, and the selection [of new members] will pass.' But it was not our intention to make lists [of candidates] with VMRO DPMNE behind closed doors," Mancevski said.

He said that their plan had been to elect the new members of these bodies at a public session, which would allow questions to be asked of the candidates, and a system of grading.

"The idea was that, if we had a political party person who was not suited to the position, to have a public...