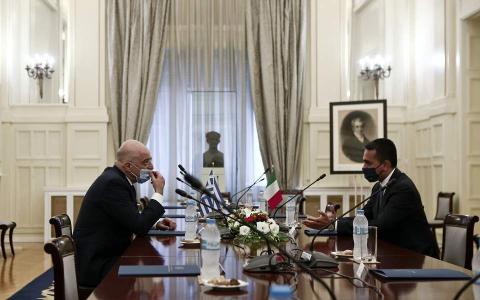 Greek Foreign Minister Nikos Dendias and his Italian counterpart Luigi Di Maio on Tuesday inked a maritime borders agreement delimiting an exclusive economic zone (EEZ) between the two countries.
The agreement, which was signed by the two foreign ministers during a visit by Di Maio to Athens and is an extension of a 1977 accord, paves the way for Greece and Italy to explore for and exploit marine resources.
It also paves the way for Greece to reach a similar deal with neighboring Albania.
"The delimitation of maritime zones with all of our neighbors in the context of international law is a consistent objective for this country," Dendias said in comments after signing the agreement.
In a regular press briefing earlier in the day, government spokesman Stelios Petsas hailed the agreement as "a development of historical significance."
The agreement comes amid...