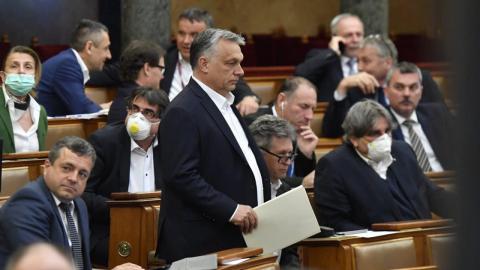 Hungary's government on Monday launched Prime Minister Viktor Orban's eighth 'national consultation', which critics describe as a tool to create the illusion of popular consent for his controversial policies.

National consultations look like opinion polls, are sent to every household, and usually contain a list of questions.

The latest to be organised by Orban's government focuses on the response to the coronavirus pandemic in Hungary and the best possible ways to tackle a new wave of COVID-19, should it return in the autumn.

"We must be prepared for it," Orban said when announcing the new national conversation in late May.

But the questionnaire also targets some of Orban's familiar political bogeymen like billionaire financier and philanthropist George Soros, as well as migrants and the European Union.

The answers to the questionnaire should be sent back by August 15, granting the government an opportunity to set the political narrative for the next two months.

The consultations are widely advertised in government-loyal media, an innovative and lavish way to support selected media outlets from taxpayers' money.

"It is important to underline that these consultations are not opinion polls. The government is not really interested in the opinion of the people but rather in influencing them. But they are in fact excellent political communications tools," Andrea Szabo, deputy director of the Institute for Political Science, told BIRN.

"These are useful tools for any populist government because they give the impression that the governing elite is in constant connection with the voters and they care about their opinion," said Szabó.

The problem is that the results of Hungary's national consultations have never really...