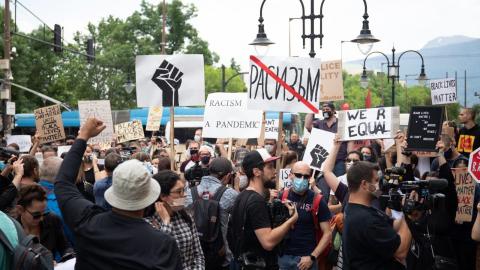 Anti-racism demonstrations have been held in several Balkan cities and in the Polish capital in recent days, inspired by nationwide protests that erupted in the US following the death of an African-American man called George Floyd, who died after a white police officer knelt on his neck for several minutes.

Activists in Zagreb, Belgrade, Podgorica, Warsaw and Sofia rallied to show solidarity but also to point out the problem of racism and police violence in their own countries.

On Tuesday evening, activists led by the Initiative against Police Violence and Racism held a protest in Zagreb to support the Black Lives Matter movement in the US but also to "draw attention to the local context" - vulnerable groups that suffer discrimination in Croatia such as refugees or the Roma minority.

The NGO Women in Black and Civic Action from the Serbian city of Pancevo organised a solidarity action under the slogan 'Justice for George Floyd' on Monday in central Belgrade, supporting the demands of American protesters such as punishment for perpetrators of racially-inspired killings, an end to the use of force by police and an end to the "criminalisation of Antifa [anti-fascists] and other protesters".

Dozens of people took part in a protest march in the Montenegrin capital Podgorica on Monday evening. "There is no doubt that racists are also hiding among all our local Balkan fascists. That's why Floyd is also 'ours'," said a statement announcing the protest.

The United Coalition Against Racism in Poland organised a demonstration called 'No Justice No Peace - Poland' in front of the US Embassy in Warsaw on Saturday. Participants held up placards with slogans like "I stand with you BLM [Black Lives Matter]" and "How many more must die?"