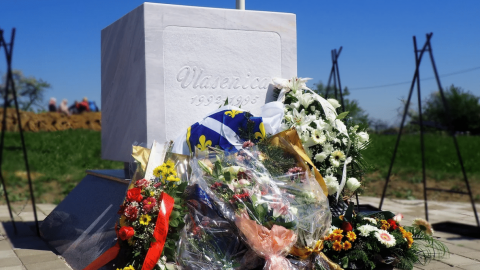 When Fikret Dzodzaljevic returns to his hometown of Vlasenica in eastern Bosnia, he always lights a candle at the grave of his former Serb neighbour, a young man called Miodrag Vrzina, who he only knew by his nickname Miki.

More than 2,000 Bosniaks were killed and around 8,000 were detained during the war in 1992, but Dzodzaljevic was not one of them - he was saved by Miki, a Serb who he hardly knew. It was Miki, not Dzodzaljevic, who was destined to die in the war.

Dzodzaljevic was living in an apartment on Brotherhood and Unity Street in Vlasenica when the war broke out. After Bosnian Serb forces took control over the town, he remained at home most of the time - but when he did venture out, he saw buildings pockmarked with bullets and graffiti insulting Muslims and calling for a 'Greater Serbia'.

"When I saw all that, I told my wife: 'You must leave, no matter what happens to me,'" Dzodzaljevic told BIRN.

He knew that the municipality was issuing passes to families wanting to leave Vlasenica, but it seemed clear to him that he would not be given one, as he and his wife had already been detained twice and he had been falsely accused of weapons possession.

The first time they were detained, a group of armed men came to the door of their apartment and took them to the police station, where he was assaulted.

"It was as if a swarm of hornets attacked us. I could not tell who was hitting me and what they hit me with," he recalled.

"After that they put me in a small room, it was perhaps two metres by two metres in size, and there were around 15 of us in there. Nobody said anything, but everybody moaned as they were in pain due to the beating."

Dzodzaljevic's brother-in-law was a well-known barber in Vlasenica and had a...