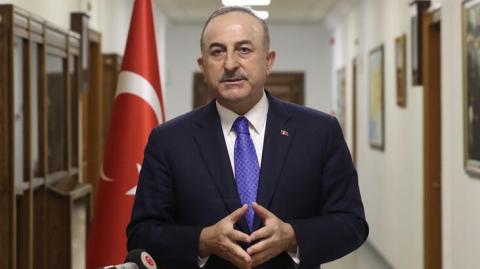 "Call for a ceasefire in Cairo was stillborn," the minister told daily Hürriyet.

The attempt is void for Turkey, the daily quoted Çavuşoğlu as saying on June 10 as he stipulated a ceasefire initiative in Libya under the auspices of the United Nations.

The minister recalled that Haftar avoided signing ceasefire agreements in Moscow and Berlin and that on the contrary he increased his aggressiveness and did not approach the ceasefire despite all this effort. Çavuşoğlu questioned why the commander now went to Egypt and made a joint ceasefire statement.

After the recent victories of the Government of National Accord (GNA) on the field, and when Haftar started to lose, he attempted to call for a ceasefire, the minister said.

"This is neither convincing nor sincere. The ceasefire effort in Cairo was stillborn. If a truce was to be signed, it should be done together on platforms like Moscow or Berlin, where everyone came together. A ceasefire is permanent only if it is accepted by both sides. But Haftar has never approached this. There is no National Reconciliation Government in Cairo, no other countries. The call for a ceasefire to save Haftar does not seem sincere and credible to us," he stated.

"If a consensus is reached on a platform, where everyone comes together under the umbrella of the United Nations, that ceasefire will be credible and permanent," Çavuşoğlu said.

He emphasized that talks with Russia were on the agenda for a transition process in Libya. Recalling that Turkey and Russia have made joint...