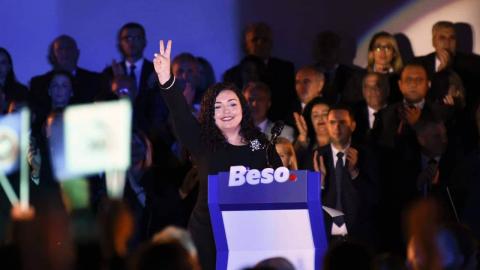 Kosovo parliament speaker Vjosa Osmani has reacted with fury to claims that her family once worked for the Serbian police when the country was under Yugoslav rule, after President Hashim Thaci repeated the allegation on Tuesday.

"Tonight, the snake tried to bite the honour of my family," Osmani wrote on Facebook, referring to Thaci by his wartime nickname of "The Snake".

Apparently endorsing allegations that her father, Raif Osmani, once worked for the Serbian police, Thaci told Klan Kosova TV that he, by contrast, had always fought the Serbian regime. "If anyone from the Osmani [family] served Serbia at the time, I fought them," Thaci said.

The president claimed that if he was in Osmani's shoes, he "would be sweating", and threatened: "I will talk a lot if she continues to slander [me]."

Thaci was referring to Osmani's own accusations that Thaci had hatched a "secret agreement" with Serbia for a land swap as a solution to the dispute between Belgrade and its former province, which declared independence in 2008.

On June 7, several media outlets published a photo of two Serbian policeman, claiming one of them was Raif Osmani.

But Osmani responded by claiming that her father had recognised the late political leader Ibrahim Rugova as the "supreme commander" of Kosovo, which she said explained why Thaci was "declaring my family a traitor, just as he was declaring Rugova [a traitor] in his communiqués from the 1990s and beyond".

Thaci and other leaders of the Kosovo Liberation Army, KLA, clashed in the late-1990s with the "pacifist father of Kosovo independence" over his advocacy of non-violent resistance to Serbian rule. "To serve your country by recognising Rugova as leader, according to Thaci, is like serving Serbia," Osmani...

Covid-19 and Greece focus of HBS webinar
LocalElections2020/ 15 international observers accredited for Sunday's local election
Alexandru Tomescu: Everyone has their own battle to fight, important is that music goes on
Romania's COVID-19 case count rises by 1,552 to 121,235, death toll hits 4,687