UN Court Urged to Hospitalise Ratko Mladic in The Hague 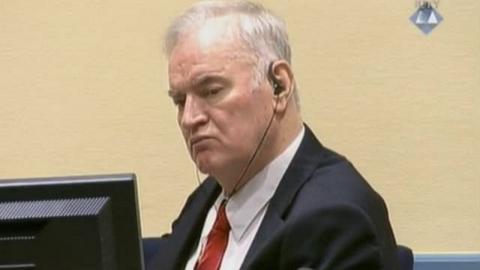 Ratko Mladic's defence team told BIRN on Wednesday that the former Bosnian Serb Army commander, who is appealing against his conviction for genocide and other wartime crimes, should be hospitalised immediately in The Hague because his health condition is now "disastrous".

Defence lawyer Branko Lukic explained that medics from Serbia suspect that Mladic has internal bleeding, and claimed that medics at the UN Detention Unit "are simply not reacting".

"We do not even receive the reports we are supposed to receive regularly, so we do not have a clear insight, we just see that something is wrong, and the documentation, which is now outdated, shows that his condition is disastrous and we think it is getting worse every day," said Lukic.

"That is why we asked that he be treated outside the Detention Unit as he obviously does not get adequate medical care there," he alleged.

The defence submitted a motion to the Mechanism for International Criminal Tribunals to request Mladic's hospitalisation on Tuesday.

Another member of the defence team, Miodrag Stojanovic, said that Mladic was currently being treated at the UN Detention Unit's infirmary.

The defence has repeatedly asked in recent years for Mladic to be sent for treatment in Russia, but this is the first time that it has been asked for him to be hospitalised in The Hague, near the Detention Unit, Stojanovic said.

"He is weak, he has lost weight, he cannot eat, he cannot stand due to anaemia, so his health condition is very, very serious," he added.

In an earlier motion to the court, the defence argued that Mladic needed to be hospitalised for his anaemia to be stabilised and due to his low haemoglobin levels.

The defence claimed that the medical experts from Serbia...