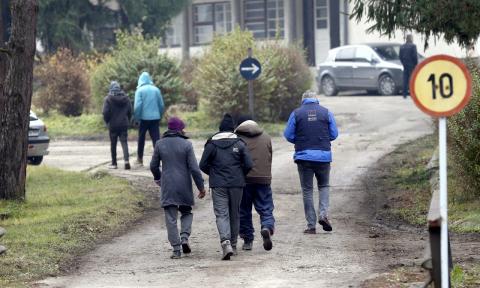 The international rights watchdog Amnesty International on Thursday described "a horrifying escalation of police human rights violations at the Croatian border with Bosnia", when it said that "a group of migrants and asylum seekers was recently bound, brutally beaten and tortured by officers who mocked their injuries and smeared food on their bleeding heads to humiliate them".

Amnesty International said it spoke to six men among a group of 16 Pakistani and Afghan asylum-seekers who were stopped by Croatian police on the night between May 26 and 27 near Plitvice lake, as they tried to cross the country to reach Western Europe.

"Between eight and ten people wearing black uniforms and balaclavas identical to those used by Croatia's Special Police fired their weapons in the air, kicked and repeatedly hit the restrained men with metal sticks, batons and pistol grips," Amnesty said in a press release. The men suffered serious injuries that night, it said.

One of them, a 30-year-old named only as Tariq, now has both arms and a leg in a cast, visible cuts and bruises on his head and face while also suffering chest pain.

"They then rubbed ketchup, mayonnaise and sugar that they found in one of the backpacks on migrants' bleeding heads and hair and their trousers," Amnesty continued, and added that it had spoken to doctors who treated the men and to NGOs who had witnessed the injuries.

The men told Amnesty International that they felt humiliated as police rubbed mayonnaise and ketchup on to their bloody heads and faces.

The organization also accused the European Union of being complicit in such abuses.

"The European Union can no longer remain silent and wilfully ignore the violence and abuses by Croatian police on its external...