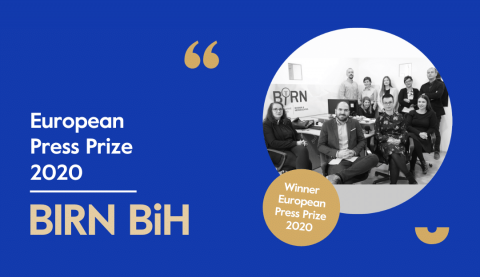 BIRN Bosnia and Herzegovina was given the European Press Prize Special Award for 2020 on Thursday for its groundbreaking work in covering transitional justice topics.

"The Balkan Investigative Reporting Network's work ensures a unique archive of all war crime trials, as well as many personal stories of survivors, documentary films about the victims of sexual violence and families of the missing, and numerous other research and analytical stories," the European Press Prize judges said in a statement.

The European Press Prize Special Award is given for excellence in European journalism and has previously been won by the editor of The Guardian for the publication of stories based on the Edward Snowden files, and last year by the Forbidden Stories team "for their mission to continue and publish the work of journalists facing threats, prison or murder", the judges said.

BIRN Bosnia and Herzegovina's executive director Denis Dzidic said the award is important for journalists in the media outlet's newsroom, but that it also belongs to the survivors of the Bosnian war.

"This award means an indescribable amount to all of us who have spent days, weeks and months writing about war crimes and reporting daily from courtrooms to record the testimony of every victim who has come to tell their story," Dzidic said.

"This award also belongs to the victims, because our work would be worthless if it were not for the surviving women and men who gathered the courage to share with us the most horrible things they experienced, showing courage,...