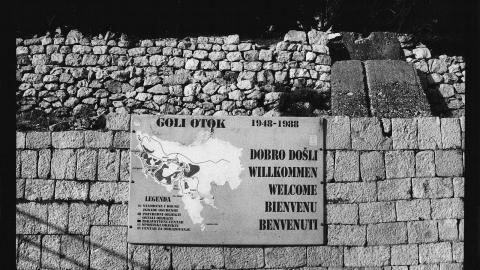 An exhibition of new images from Goli Otok go on display at the Cultural Centre of Belgrade on Thursday evening gives a contemporary view of the former prison camp, which photographer Milomir Kovacevic described as "the biggest 'stain' on Yugoslavia, communism, the [Communist] Party and [Josip Broz] Tito".

Kovacevic's exhibition, 'Welcome to Goli Otok', features black-and-white images shot in 2018, and is grounded in his own experiences.

"In the 1990s, I filmed prisons in Bosnia and Croatia with real prisoners, and that was something special for me then, to see people living in specific circumstances and with specific rules. Afterwards, I spent 1,007 days in the war in Sarajevo, which was in a way a big prison with its own specific rules," he told BIRN.

After the 1990s war and the siege of Sarajevo ended, Kovacevic came across the testimonies of former prisoners from Goli Otok.

"This further strengthened my desire to go there and see what it looks like now, where innocent people lived, were imprisoned and tortured, and some died there. I wanted to talk about that time again through my photos, and the suffering of the people," he explained.

"In a way, this is my homage to the innocent victims," he added.

The exhibition runs until July 30.

The remains of bars, lamps and wires used to control the movements of prisoners. Photo: Milomir Kovacevic.

Marks made by a prisoner at the jail. Photo: Milomir Kovacevic...