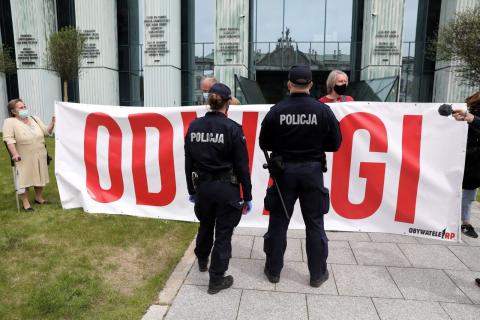 But the ultimate outcome of this conflict will depend on the results of the upcoming presidential elections, as well as on the future involvement of the EU, they say.

"Poles have the support of judges and lawyers from Europe and from across the world, and this support is very valuable," Tuleya told BIRN.

"At the same time, EU institutions are not as decisive as European citizens. The [European] Commission and the ECJ [European Court of Justice] should act faster and more decisively," he added.

The Supreme Court's Disciplinary Chamber held the hearing after the public prosecutor's office asked it to revoke Tuleya's immunity, so he could face criminal charges for allegedly overstepping his powers in 2017.

Tuleya had angered the authorities when he rejected a prosecution request to call off an investigation into a potentially illegal parliamentary vote organised by the ruling Law and Justice party, PiS.

Tuleya faced up to three years in prison if found guilty. Most experts saw the move against him as a part of an ongoing offensive aimed at placing the rule of law under direct government control.

The hearing took place without Tuleya's presence, as he had refused to enter the Supreme Court. Instead he remained in front of the building, flanked by supporters, which he said was sign of his defiance of the Disciplinary Chamber - and proof...