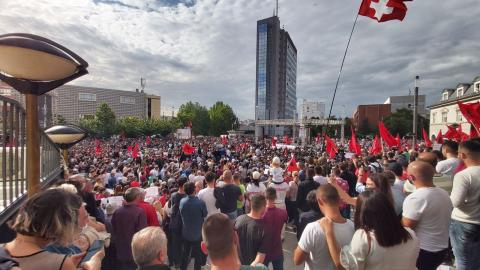 Kosovo's largest parliamentarian party, the Vetevendosje Movement, LVV, staged a march in Pristina's main Skanderbeg Square on Friday to mark the 15th anniversary of its organisation - and the 21st anniversary of Kosovo's liberation from Serbian rule in 1999.

"In this double anniversary, we are in a situation that requires patience and solution," LVV leader Albin Kurti said in a video shared on his Facebook account on Thursday, inviting citizens to participate in the march.

Kurti claimed that patience was needed both to survive the COVID-19 pandemic and while awaiting the "upcoming elections" that his party has demanded since being toppled from power in March.

Due to its long history of protests and the way its government was overthrown, some feared the Vetevendosje anniversary march could to turn into a violent protest. However, the participants stood in red marks in the Pristina square, keeping a social distance and respecting COVID-19 prevention recommendations.

Vetevendosje, which means "self-determination" in Albanian, was founded on June 12, 2005, on the anniversary of Kosovo's liberation, as a protest movement. It only entered politics officially in 2010, and has grown to be the biggest opposition party since then.

Vetevendosje came first in Kosovo's October 2019 snap elections and led a fragile coalition government with the Democratic League of Kosovo, LDK, with LVV leader Albin Kurti as the Prime Minister.

The coalition lasted only 51 days before the government was toppled via a no-confidence motion initiated by the LDK. Currently, the country is led by a coalition between the LDK, chaired by Isa Mustafa, the Social Democratic Initiative NISMA, chaired by Fatmir Limaj, and the Alliance for the Future of Kosovo, AAK, led...