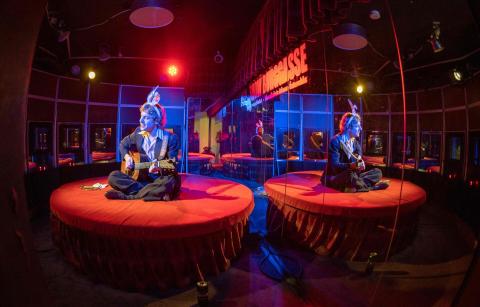 At a Vienna peep show, all the usual trappings are in evidence -- from mirrors and red velvet to soft lighting -- but coronavirus has led to a change of act.

Artists tired of performing on the internet have moved in and can sing to a live, if ephemeral, audience that now just pays for a few minutes' music at a time.

On June 10, 150 people sipped beers while they waited their turn to amble down halls plastered with posters of naked women in suggestive poses.

"We were surprised ourselves by the positive reaction from the artists and the public," said Stefan Strahammer, one of the organisers.

"At first, when we emailed the peep show owner, he didn't take us too seriously but he was very enthusiastic and supportive and gave us the space for free," he told AFP.

Only 17 people enter at a time owing to health restrictions and they stay for 15 minutes, enough for three or four songs, paying what they like.

"I think it's a little bit strange to go to a peep show because I've never been to a peep show in my life," said Annelise Seidl, who is in her forties.

"That's a first. It's a good project for the sex workers who are going to get donations," she said.

Voodoo Jurgens, who is well known on the local music circuit, helped wrap up the shows on June 10.

He sat on the turning set in a disco suit with his guitar, and like the others would give 20 percent of whatever he earns to an association that supports sex workers.

The sex trade is legal in Austria, but the city's numerous brothels have closed to help stem the spread of COVID-19.
Already in a precarious position, sex workers now find themselves even worse off.

"They are pushed more and more to the fringes and this project is a good way to...

Slovenia’s beer trade on the rise