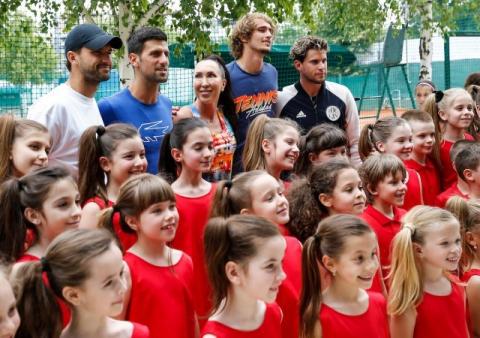 Novak Djokovic, world no.1 tennis player, managed to gather tennis world stars such as Dominic Tim, Alexander Zverev and Grigor Dimitrov, who will participate in a humanitarian tournament over the weekend.
The grand opening was a real spectacle.
The tennis players held a press conference, and then headed to the courts, where a mixed doubles was played.
Jelena Jankovic returned to the field after two years and in a pair with Novak Djokovic defeated Nenad Zimonjic and Olga Danilovic - 7: 6.
After an interesting match in the mixed doubles, a music program followed.
DJ and one of the best pianists in the world, Lola Astanova, had a performance and were in charge of the great atmosphere.
They were joined by Novak, who played first next to the DJ, and then played the piano together with Astanov.

After a short break, the participants of the Adria Tour came out on the field, all except Damir Dzumhur, the winner of the qualifying tournament, who joined them later, when the draw began.
All participants, together with Nenad Zimonjic, were divided into team Zimonjic and team Djokovic and played a double match with flying changes. Djokovic's team won with the score 6: 4.
After the match, a draw was held, tennis players hit the boxes with their serve and decided who would be in which group. Novak Djokovic, Aleksandar Zverev, Filip Krajinovic and Viktor Troicki will play in Group A, while Dominic Tim, Grigor Dimitrov, Dusan Lajovic and Damir Dzumhur will play in Group B.
The program was closed by the performance of Nemanja Radulovic, a famous Serbian violinist.
Follow Adria Tour on B92.net. ﻿