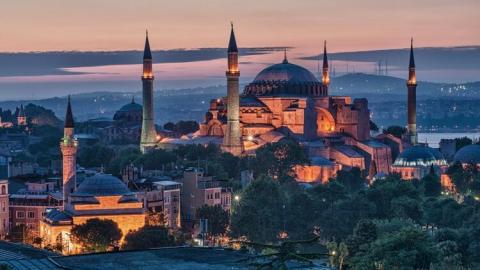 The debate over the possible reopening of Istanbul's Hagia Sophia Museum as a mosque has turned into a domestic political row between the ruling Justice and Development Party (AKP) and the main opposition Republican People's Party (CHP), an MP for the latter has said.
CHP deputy İbrahim Kaboğlu said "common heritages" must remain as museums, including the Hagia Sophia, Sultanahmet Mosque and Topkapı Palace.

Kaboğlu said the decision to take this to the Council of State to issue a verdict on whether the museum should be turned into a mosque, as it was during Ottoman rule, is an "instrumentalization of the judiciary on the issue of Hagia Sophia."

After receiving backlash from AKP MPs over his remark on the Sultanahmet Mosque, he revised his comments in an interview with daily Hürriyet, saying he never asked for the conversion of Sultanahmet, a place of worship, but that it should be embraced "in the sense of empathy and with a more universal perspective."

AKP spokesperson Ömer Çelik accused the CHP deputy's proposal of changing Sultanahmet Mosque into a museum as "disrespect" to Turkish values and culture. "We strongly condemn this mentality," he stated. He accused the CHP of speaking like "rival countries" that are against Turkey. "Those who think this way only speak the theses of other states on the issues of Libya, the eastern Mediterranean and Syria," Çelik said.

"Turkey has reinforced the respect for places of worship of all religions for many years. They [CHP] are doing all kinds of disrespect...