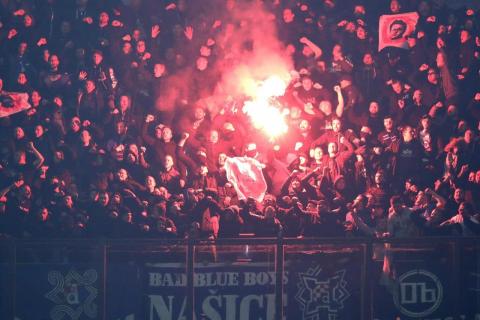 A photograph that was circulated on social media of a group of Dinamo Zagreb fans holding lighted flares and a banner with an obscene anti-Serb slogan has provoked outrage.

"There does not seem to be a rock bottom," Dario Brentin, associated researcher from the University of Graz in Austria, an expert on sport and nationalism in Croatia, wrote on Twitter on Friday.

In the photo, two other men are holding up flags of the Croatian Defence Forces, a paramilitary organisation from the 1990s war.

The Croatian Defence Forces use the Ustasa slogan 'Za dom spremni' ('Ready for the Homeland') as their official slogan and on their legally-recognised coat of arms.

The picture was taken in Zagreb by photographer Nikola Solic who posted it on Facebook on Thursday evening. According to Solic, the Dinamo Zagreb fans were chanting "Kill, kill".

There does not seem to be a rock bottom: "We'll f*** Serbian women and children" decorated with Ustaša symbolry & HOS flags incl. "Za dom spremni" pic.twitter.com/jmBKfQRgay

"This is creepy and disturbing for everyone, not just Serbs. It is sad to see that young people in Zagreb are full up with so much hatred that they write such disgusting messages," Milosevic told N1 TV on Friday.

He noted that other similar incidents were documented in the Serbian National Council's annual report, 'Historic Revisionism, Hate...