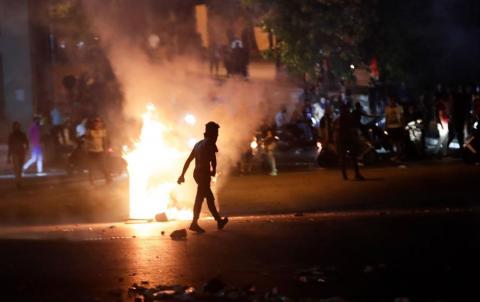 Hundreds protested for a second night to decry Lebanese authorities' handling of a deepening economic crisis, despite the government pledging on June 12 to inject dollars into the market to bolster the sagging currency.

Near a protest square in central Beirut, around 200 young men drove in on mopeds and defaced shop fronts, setting fire to several stores, an AFP correspondent said.

Security forces fired tear gas to disperse them, and they fell back, but then started throwing stones. Some chanted against sectarianism.

In the second city Tripoli, the army dispersed hundreds shouting "revolution, revolution", sparking clashes between the two sides, an AFP reporter there said.

Demonstrators lobbed stones and Molotov cocktails toward the soldiers and damaged the facades of several banks and shops. Soldiers responded with tear gas.

After a crisis meeting on June 12, President Michel Aoun announced that the central bank will from Monday begin to execute measures including "feeding dollars into the market", in a bid to support the Lebanese pound.
In Tripoli, Wael, 17, said: "I just want a job so I can live."

"We don't believe all the measures taken by the government to improve the dollar exchange rate."
Lebanese media reported that the exchange rate had tumbled to 6,000 per dollar on the black market early on Friday, compared to the official peg of 1,507 in place since 1997.

Protesters had initially taken to the streets after sundown on Thursday, decrying the spiraling cost of living and the government's apparent impotence in the face of the worst economic turmoil since the 1975-1990 civil war.
Demonstrators also rallied against the governor of the central bank, Riad Salame.