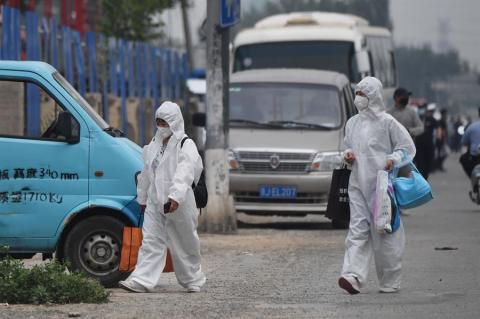 China reported 11 new coronavirus cases on June 13, including six domestic cases in the capital that raised concerns about a resurgence.

The majority of China's cases in recent months were overseas nationals tested as they returned home, with the domestic outbreak brought largely under control after the disease first emerged in the central city of Wuhan last year.
But the new cases have prompted Beijing officials to delay the return of students to primary schools, and suspend all sporting events and group dining.

City authorities on Friday also closed two markets visited by one of the known cases.

The chairman of the Xinfadi meat wholesale market told state-run Beijing News that the virus was detected on chopping boards used to handle imported salmon.

Major supermarket chains including Wumart and Carrefour removed all stocks of salmon overnight in the capital, but said supplies of other products would not be affected, Beijing Daily reported June 13.

The novel coronavirus is believed to have jumped from an animal to humans at a Wuhan market that sold wildlife.

On June 11, and authorities confirmed two more infections the next day.

The other five cases reported on June 13 were brought in from overseas.

Meanwhile, the coronavirus pandemic has killed 425,000 people since it emerged in China late last year, according to an AFP tally of official sources at 0130 GMT on June 13.