Turkey in favor of political solution in Libya: Top aide 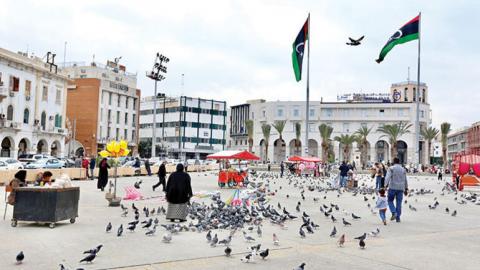 Turkey's presidential spokesman İbrahim Kalın on June 12 said Ankara is in favor of a political solution in Libya.

Speaking to reporters after his official visit to Berlin, Kalın said Libyan warlord Khalifa Haftar violated the Berlin agreement like many others before it.

Kalın said Turkey will not undermine any call for a cease-fire but it is important to see where this call is coming from and what is the motive.

"When he starts to lose position, he immediately declares a ceasefire and tries to open a space for himself."

Instability in Libya will affect North Africa and the south of Europe from there including NATO's border, said Kalın.

"One of the most important points of illegal immigration is Libya. Because it is very close to Europe. There is Malta right across. It is the neighbor of Italy and Spain. If there is instability in Libya, if the war continues, illegal migration continues, drug trafficking and human trafficking continue, this affects NATO's security as well as Europe's security.

Eurostat: Hourly Labour Costs Ranged from EUR 6.5 in Bulgaria to EUR 45.8 in Denmark in 2020
Eurostat: Slovenia saw the biggest rise in domestic tourism in 2020

Average daily coronavirus count down as hospitalisations fall below 500