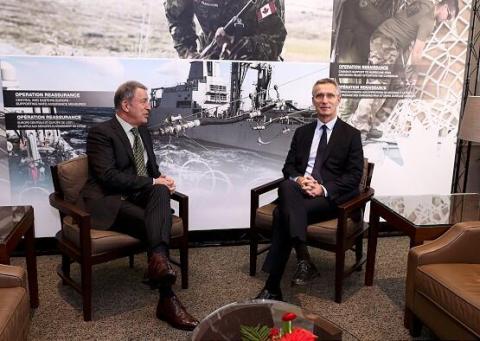 The Turkish defense minister and NATO secretary-general discussed Syria, Libya and regional issues in a phone call, the Turkish National Defense Ministry said in a statement on June 12.

"Minister Akar and Secretary General Stoltenberg exchanged views on NATO and regional issues, including Syria and Libya, as well as the meeting of NATO Ministers which will be held on 17-18 June 2020 via teleconference," it said.

In Libya, the government, which enjoys recognition by the U.N., has been under attack by warlord Khalifa Haftar's forces since April 2019, with more than 1,000 killed in the violence.

The Libyan government announced on June 8 that it will be open to negotiations with Haftar only after liberating the city of Sirte and the central Juffra region, home to a strategic military airbase.

The government launched Operation Peace Storm in March to counter attacks on the capital and recently regained strategic locations, including the Al-Watiya airbase and Tarhuna, which is viewed as a significant blow to Haftar's forces.

Syria has been mired in a vicious civil war since early 2011 when the Assad regime cracked down on pro-democracy protests.

Since then, hundreds of thousands of people have been killed and more than 10 million displaced, according to U.N. estimates.