AEK alone in second as PAOK draws in Athens 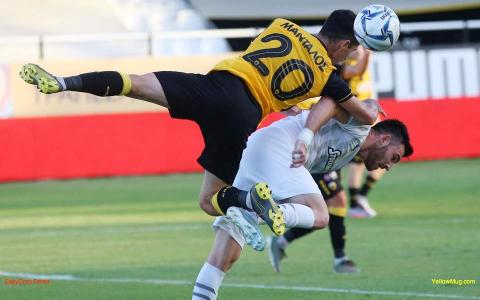 AEK has moved up to second in the Super League as it defeated OFI away and PAOK drew in Athens with Panathinaikos, while Olympiakos edged even closer to clinching the title mathematically.

The Reds downed Aris 3-1 in Piraeus and need eight more points in as many games to be crowned champion.

Mady Camara scored twice within 90 seconds for Olympiakos, with Giorgos Masouras adding a third before the first half expired. Former Olympiakos striker Brown Ideye pulled one back for Aris.

AEK remained 17 points off the pace but is now alone in second thanks to is 2-0 win at Iraklio on Sunday. Two strikes by Marko Livaja and Dani Verde sufficed for the Yellows to get on the driving seat for Greece's second spot in next season's Champions League.

With eight games left to play on the round-robin playoffs, Olympiakos is on 72 points, always undefeated, and AEK is on...