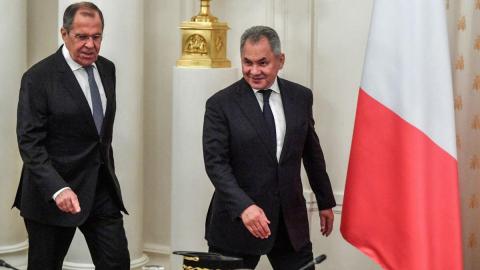 "It was decided that the contacts and negotiations between the deputy ministers of the two countries will continue in the coming period. Ministerial talks will take place at a later date," said the ministry in a written statement.

The ministers were expected to have consultations on Idlib and Syria.

The visit was planned amid a series of military victories of Libya's U.N.-recognized Government of National Accord (GNA) against General Khalifa Haftar's forces.

In an interview last week, Foreign Minister Mevlüt Çavuşoğlu undermined recent "Cairo initiative" of the commander and said when General Khalifa Haftar started to lose, he attempted for a ceasefire in Libya. He noted the initiative, supported by Egypt's President Abdel-Fattah al-Sisi, was "stillborn."

Çavuşoğlu stipulated a ceasefire only under the auspices of the United States and said Turkey aimed consultations with Russia for the transition process in Libya.

Recalling that Turkey and Russia have made joint efforts for a ceasefire in Libya in the past, the minister noted both the presidents of the two countries, along with the foreign ministers have recently discussed the matter on the phone. "We told them that we did not find the Cairo statement correct, but unrealistic and insincere, so we would not support it. We will have talks with the Russians on Libya in the coming days," he stated.