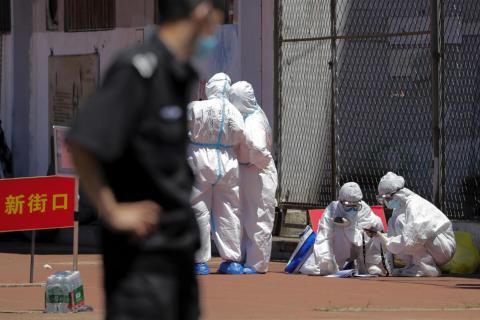 China reported its highest daily number of new coronavirus cases in months on June 14 with parts of Beijing still under lockdown, offering a second wave warning to the rest of the world as the pandemic rages in South America.

The shock resurgence in domestic infections has rattled China, where the disease emerged late last year but had largely been tamed through severe restrictions on movement that were later emulated across the globe.

It also provides a bleak insight into the difficulties the world will face in conquering COVID-19 -- even as countries in Europe prepare to reopen borders at the beginning of the summer holiday season after an encouraging drop in contagion.

Of the 57 new cases logged by Chinese authorities, 36 were domestic infections in the capital, where a large wholesale food market at the centre of the outbreak has been closed and nearby housing estates put under lockdown.

"People are scared," a fruit and vegetable trader at another local market in central Beijing told AFP.

"The meat sellers have had to close. This disease is really scary," said the man surnamed Sun, adding there were fewer customers than normal.

At least 429,000 people worldwide have died from the respiratory illness, nearly halfway through a year in which countless lives have already been upended as the pandemic ravages the global economy.

The total number of confirmed cases has doubled to 7.7 million in slightly over a month and the disease is now spreading most rapidly in Latin America, where it is threatening healthcare systems and sparking political turmoil.

Brazil now has the second-highest number of virus deaths after the United States, surpassing Britain's toll, and the Chilean...