Vucic in Takovo: Serbia will be a tough nut to crack for any opponent VIDEO / PHOTO 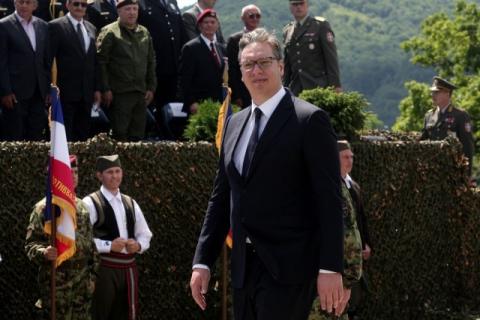 The military flags handover ceremony on the occasion of establishing the 72nd Special Operations Brigade and the 63rd Parachute Brigade is being held at the "Second Serbian Uprising" Memorial Complex in Takovo.
"By handing over these flags, we are telling everyone that we will keep peace and stability, but that we will be strong and getting stronger every day. We will be a tough nut to crack for anyone who tries to break it," Vucic said.
"Serbia is both stronger and prouder today."
"You have always received the biggest blow, you have always been with the people. You are the bravest part of our nation. I am today so proud in my role as President of Serbia because I can hand over the flags of honor back to you. Those flags must never fall into the hands of the enemy," said the Commander-in-Chief of Serbian Army.
The flag of the 72nd Special Operations Brigade was handed over to the commander of the unit, Brigadier General Miroslav Talijan, who was the wartime Deputy Commander of the "Sokolovi" (Hawks) Counter-Terrorist Battalion. The flag of the 63rd Parachute Brigade was handed over to its commander, Colonel Nenad Zonic, a former member of the wartime Command of the 63rd Parachute Brigade.
President Vucic told the members of the army that they are the ones who guard Serbia.
"All my messages fit into one - you are the ones who guard the country. Be what you have always been - guard and defend Serbia," the President of Serbia said at the ceremony in Takovo.
The President of Serbia was presented with an officer's saber, and it was pointed out that it was a sign of gratitude and that it was a "symbol of the military unit, morale and libertarian tradition".
Vucic announced that an event on the occasion of the liberation of...

What awaits us? Are we threatened with a lockdown for the weekend?

New contingent of 500.000 vaccines arrive from China on Vučić's birthday

On Biden's orders - United States attacked Syria from the air, there are casualties

What awaits us? Are we threatened with a lockdown for the weekend?