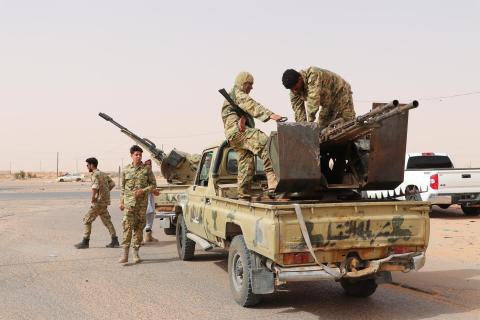 "After the official invitation by the Sarraj government, we sent some of our armed forces to [Libya]. The GNA members became very successful during their struggle. They truly wrote epics there," Akar said.

"These putschists, those who are against unity and solidarity, lost," he added, referring to the eastern-based military commander Khalifa Haftar's forces.

"They lost when they were able to seize Tripoli in one day," he added.

Akar also underlined that the Turkish military's help towards the GNA forces had a very "significant" contribution to the latter's success.

"[The Turkish military] became a guiding light. This drastically shifted the balance [in Libya]," he added.

The minister also underlined that Turkey's military equipment, which is indigenous up to 70 percent, changed the balances in the region.

"Now, no one will be able to create a solution in Aegean, eastern Mediterranean [and] in Cyprus, without cooperating, discussing, or exchanging information with Turkey," he said.

"In this context, everyone should know that neither Turkey nor the TSK [Turkish Armed Forces] will not let any fait accompli," he added.

US, Russia must fulfill...