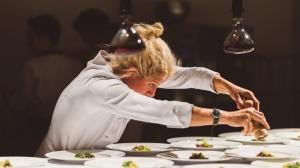 Roš, a self-taught cook who took over the restaurant from her parents-in-law, became the first chef with two Michelin stars in the region.

"Michelin has arrived in Slovenia at a key moment, just at the right time," she told the press. "It's not easy for tourism and the restaurant business right now. We have not laid off people and don't want to. We need each and every guest willing to get in the car and drive to Kobarid," she said.

She believes the rating proves that Slovenia is an excellent culinary destination. "Six restaurants received their stars in the first rating ... Moreover, I know that there are many candidates shortlisted for the stars and there will be great surprises coming up next year."

Roš has been celebrated for years, having been named the World's Best Female Chef by the World's 50 Best Restaurants culinary portal in 2017 and a year later...

Decade after arbitration referendum Slovenia, Croatia still on opposite sides