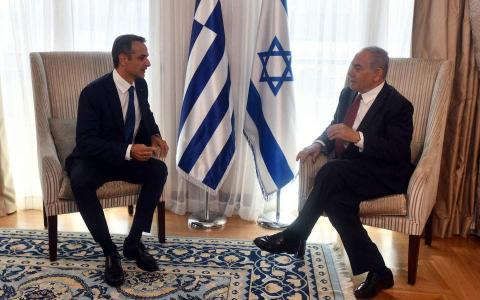 Amid an escalationof tension between Athens and Ankara in the Eastern Mediterranean, Greece and Israel urged respect for the sovereign rights of all states within their continental shelf and exclusive economic zone, in line with international law.

"We strongly oppose attempts to violate these rights in a manner that endangers the stability of the Eastern Mediterranean and the Aegean Sea, violates international law and runs counter to good neighborly relations," read a joint declaration issued after talks in Jerusalem on Tuesday between Greek Prime Minister Kyriakos Mitsotakis and his Israeli counterpart, Benjamin Netanyahu.

Speaking to reporters after their talks, Mitsotakis said that he set out "what I consider our view to be regarding Turkey's aggressive behavior in the Eastern Mediterranean."

"We consider this activity to be a threat to regional peace and...