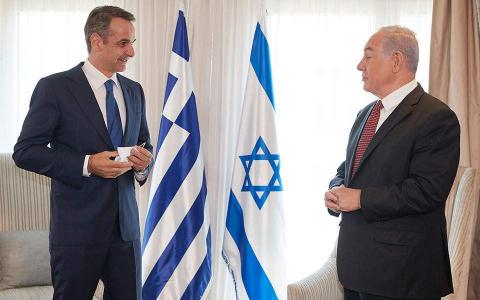 Israel has reiterated its "full support and strong solidarity" to Greece on the issue of maritime zone delineation, while expressing its "opposition to any attempt to violate" the country's sovereign rights.
In a joint statement issued after the meeting between Prime Minister Kyriakos Mitsotakis and his Israeli counterpart Benjamin Netanyahu in Jerusalem on Tuesday, Israel said it attached "great importance to its longstanding and important partnership with Greece."
Israel also called for respect for the sovereign rights of all states in their continental shelf and exclusive economic zone (EZZ) in line with international law.
"We strongly oppose attempts to violate these rights in a manner that endangers the stability of the Eastern Mediterranean and the Aegean Sea, violates international law, and runs counter to good neighborly relations," the statement said.