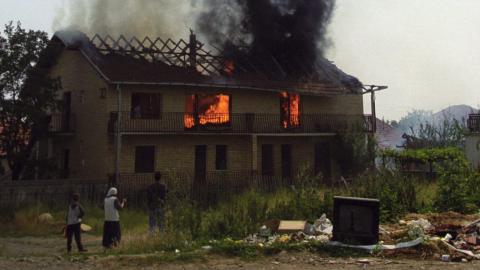 He and others were held by the KLA in the mountains of northern Albania until June 1999. After the war officially ended, he and three other detainees were brought to a building in Prizren in Kosovo. A week later, he managed to escape.

Later that year, in November 1999, his brother Haki was killed after being taken away in broad daylight by uniformed KLA men - even though the KLA had officially disbanded by that point.

In July 2011, a panel of judges from the EU's rule-of-law mission in Kosovo, EULEX, convicted five former KLA members of the mistreatment of civilian detainees at KLA-run detention camps in Kukes and Cahan in Albania in 1999. Sabit Geci, Riza Alija and Xhemshit Krasniqi, Shaban Hoti and Haki Rexhepi were all found guilty of war crimes.

But as in other war crime trials in Kosovo, the victims were not compensated.

Imeri said that since the war, he has suffered from various medical problems and from psychological trauma. "When the verdict was delivered, I expected to hear about compensation because there were people also who died there, but nothing happened," he said, referring to the case of Anton Bisaku, who was named as one of the known victims of secret detention camps in Council of Europe rapporteur Dick Marty's report about alleged crimes by KLA members.

The court verdict in the case against the five ex-KLA members didn't include any restitution for victims, although by law, Kosovo courts should instruct victims in war crime trials to claim compensation in civil proceedings.

Besnik Ramosaj, director of the Statistics Department at the Kosovo Judicial Council, told BIRN that his institution does not compile statistics about cases in which courts have ordered compensation.

"Also we don't have any statistics...