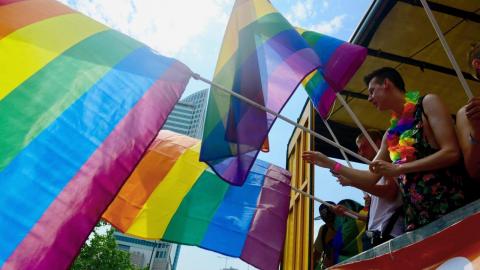 "My parents' generation for 40 years fought to eliminate communist ideology from schools, so it couldn't be forced on children, so that youth, children, soldiers and youth organisations couldn't have their brains washed," Duda told the crowd.

"They didn't fight for this so that a new ideology would appear that is even more destructive for people … an ideology that wants to eliminate all those which do not succumb to it," Duda added.

The day before, a member of his campaign staff, from his ruling Law and Justice party, PiS, Przemyslaw Czarnek, speaking on TVP Info, said: "Let's put an end to listening to these idiocies about human rights, or some equality. Those people are not equal to normal people."

The language used by Duda and his staffer has met a storm of criticism, with people taking to Twitter to criticise the remarks using the hashtag #mamydosc (#wehadenough).

Faced with the criticism, Duda defended himself on Sunday on Twitter, accusing the foreign media of "putting his words out of context". He added that he "truly believed in diversity and equality".

1/3 @Reuters, @nytimes, @AP, @guardian, @FinancialTimes Yet again, as part of dirty political fight, my words are put out of context. I truly believe in diversity and equality.