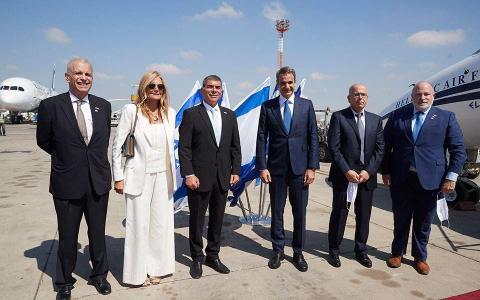 Prime Minister Kyriakos Mitsotakis visited Israel on Tuesday in a show of confidence in the countries' anti-coronavirus measures which Athens hopes can be translated into a resumption of tourism.

With Greece, Israel and Cyprus partnered up on energy projects in the eastern Mediterranean, Mitsotakis also warned against exploration efforts by "neighbourhood bully" Turkey.

Israel sees the visit as an opportunity to dilute European opposition to its planned annexation of occupied West Bank land which the Palestinians want for a state.

Hoping to salvage its tourism sector this summer, Greece opened its main airports to mainly EU visitors on Monday. Israel has provided about 1 million tourists annually in recent years.

"I am certain that the flights from Israel will resume very soon," Mitsotakis told Israel's biggest-selling newspaper, Yedioth Ahronoth before...