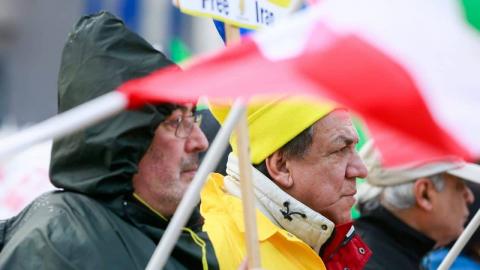 Fugitive former judge Gholamreza Mansouri has been arrested in Romania over corruption charges pressed by Tehran, which is seeking his extradition, media reported.

Press freedom activists are demanding meanwhile that Mansouri be tried in Bucharest for allegedly ordering the arrest and torture of at least 20 journalists.

"Crimes against journalists can't go unpunished. Many journalists denounced the crimes of Gholamreza Mansouri against them and now it's time for justice," said the secretary-general of the International Federation of Journalists, Anthony Bellanger.

A magistrate from Bucharest's Court of Appeal rejected the prosecutor's request for Mansouri to remain in police custody and ordered the authorities to evaluate if his human rights would be respected in Iran, ahead of the next court hearing to be held on July 10.

Mansouri, a former judge at Iran's Culture and Media Court, created by the Iranian regime to enforce censorship, was freed under supervision and is banned from leaving Romanian territory until a ruling on his case.

He has been accused in his own country of taking bribes amounting to 500,000 euros.

He left Iran earlier this month for Germany, where Reporters Without Borders asked prosecutors to arrest him over his alleged human right abuses.

The former judge subsequently travelled to Romania, from where the Tehran government hopes to get him extradited.

The spokesperson for Iran's judiciary, Gholamhossein Esmaeili, said on Saturday that "mutual cooperation will continue" in the extradition process.

He attributed the fact that Mansouri was not been immediately sent to Iran to flight restrictions due to the...

We have all pairs - three spectacular matches scheduled!
German Ambassador celebrated at Choral Temple upon end of tenure