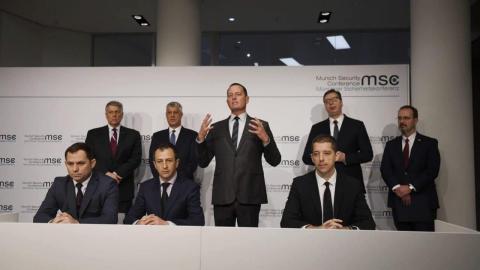 Grenell wrote on Twitter on Monday that he had received a commitment from the governments of Kosovo and Serbia to "temporarily pause the derecognition campaign and the seeking of international memberships in order to meet in Washington, DC at the White House on June 27 for dialogue discussions".

He was referring to Serbia's campaign to convince countries to reverse their recognitions of Kosovo, and Kosovo's campaign to join international organisations like Interpol and UNESCO, each of which has infuriated the other and impeded dialogue on normalising relations.

Vucic told media that he "expects a good conversation"" in Washington, but added: "We will see first whether the Albanians will respect what Grenell said about not trying to join international organisations."

Kosovo President Hashim Thaci expressed satisfaction about Grenell's announcement that negotiations would continue, taking to  Twitter to say that "US leadership and support has always been decisive for the prosperous future of Kosova".

Referring to claims by former Prime Minister Albin Kurti that a secret agreement for a Serbia-Kosovo land swap had been made between Thaci and Vucic, Thaci insisted on Twitter on Monday evening that was no "hidden agenda", "backroom dealing" or "secret plan".

Kosovo Prime Minister Avdullah Hoti said meanwhile that the announcement that Serbia was pausing its derecognition campaign represented the first results of his government's "coordinated activities with our...