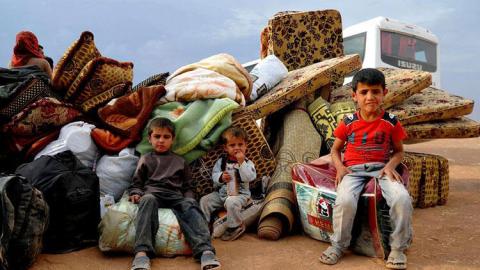 Turkey is currently hosting 5 million migrants, 3.6 million of whom are Syrian nationals, the general director of the country's migration authority said on June 16.

Speaking in a live broadcast on the International Migration Film Festival's Instagram account, Abdullah Ayaz said 3.6 million Syrians have come to Turkey since 2011, while the county saw an influx of a total of 2 million migrants from 1923 to 2011.

Some 98 percent of the Syrians in Turkey live in cities, with only 68,000 Syrians accommodating in seven camps located in five provinces. Around 400,000 Syrians went back to their country until now, according to data given by the official.

"Turkey hosts the largest migrant population in the world. The country has successfully managed the issue since the beginning of the Syrian crisis in 2011. There is no migration crisis in Turkey. Our society deserves the greatest gratitude in this regard," he said.

"Syrians in Turkey benefit only from health services," said Ayaz, underlining that they don't get direct support from the state. Only 1.3 million Syrians get a monthly payment of 120 Turkish Liras via the Turkish Red Crescent (Kızılay) as part of a European Union financial program.

When asked about the general situation in the world, Ayaz said there are more than 270 million migrants, nearly 70 million forcibly displaced people and over 25 million refugees around the world.

"Unless we fail to eliminate the causes of migration, both we and the different parts of the world will face a migration issue," he said, adding that some people see migration as an arbitrary movement of people.

"These are statistics. But each of these numbers, which we are skimming through quickly, represents a human life. There is lack of...