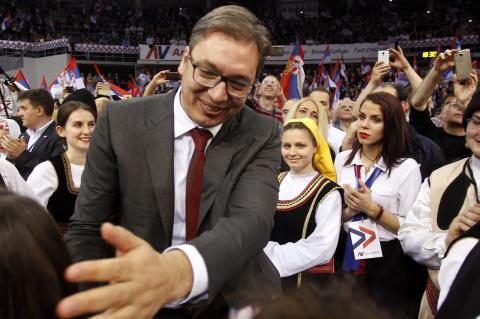 The current government in Serbia began its mandate in 2016 with Aleksandar Vucic as prime minister.

After taking office, in their speeches to parliament, the two of them made a total of 99 pledges.

After the Progressive Party won its third parliamentary election victory on August 9, 2016, its leader Vucic read out his plans as prime minister in parliament for six hours, making detailed promises concerning everything from building local roads to subsidies for agriculture.

A year later, his term as prime minister ended when he decided to run for president. To the surprise of many, his shoes were filled by Ana Brnabic, then the little-known minister of public administration, but a figure of continuity within Vucic's government.

As well as in terms of general political and economic direction, Brnabic has followed Vucic when it comes to detailed pledges with precise timescales.

With new parliamentary elections set for June 21, BIRN fact-checked all the measurable promises made by the two PMs in their initial speeches to the legislature.

The key goals they both set for the 2016-to-2020 term concerned the fight against corruption, progress in the EU accession process, stable and lasting economic growth, attracting foreign investment, raising people's living standards and the digitalisation of the public administration....