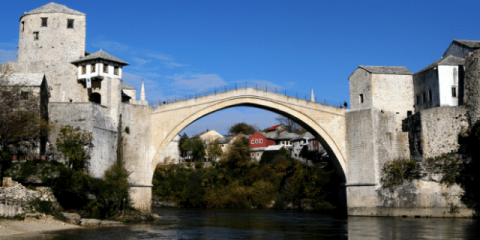 Bosnia's main Bosniak and Croat parties have finally struck a breakthrough deal on how to rule the ethnically-divided southwestern city of Mostar, paving the way for the first local elections to be held there since 2008.

The Bosniak Party of Democratic Action, SDA, and the Croatian Democratic Union, HDZ, signed a deal on Wednesday on a new statute for Mostar after several weeks of renewed talks.

Mostar has been politically paralysed for years and run by a de facto acting mayor from the HDZ, whose administration has not been able to resolve an ever-rising number of communal problems.

Wednesday's deal was signed by SDA leader Bakir Izetbegovic and his HDZ counterpart, Dragan Covic at a meeting in Mostar attended by US ambassador Matthew Field and EU delegation chief Johann Sattler.

Covic said after the signing ceremony, carried live on TV, that details of the new statute will be communicated later by local officials who carried out the brunt of negotiations, adding the two sides would now initiate a legislative process to change Bosnia's electoral law as soon as possible.

"What we can say for sure is that the elections in Mostar will take place at the same time as the next local elections," Covic said.

Bosnia will hold its seventh post-war local elections on November 15. The vote was originally scheduled for October 4 but was delayed because the state government could not provide its half of the funds necessary for organizing the vote.

Covic's counterpart, Izetbegovic, said the agreement on the new statute, which will be adopted at the next session of the city council, was a compromise that foresees joint management of the city, adding it is not the best solution but was the only one possible. "Hopefully, new generations...