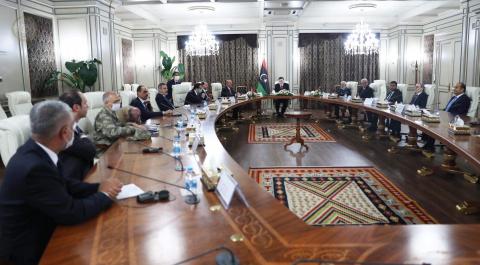 The delegation met with the U.N.-backed Government of National Accord (GNA) Prime Minister Fayez al-Sarraj.

The visit came amid efforts to reach a ceasefire and eventually launch a political process in the war-torn country after GNA made advances against rival General Khalifa Haftar's forces.

In an interview on June 15, Çavuşoğlu said the Russian visit was postponed not because of a "crisis" on ceasefire efforts in Libya, but for a requirement to further engage with partners in Libya in a bid to reach a lasting truce.

Çavuşoğlu last week undermined the recent "Cairo initiative" of Haftar and said when the general was losing, he attempted to call for a ceasefire in Libya. He noted the initiative, supported by Egypt's President Abdel-Fattah al-Sisi, was "stillborn."

Russia, along with the United Arab Emirates and Egypt, backs the LNA. The United Nations said on June 10 that Libya's warring sides had begun to engage in a new round of ceasefire talks.

Meanwhile, a visit to Turkey by Italy's top diplomat set for June 17 has been postponed to June 19, according to the Turkish Foreign Ministry.