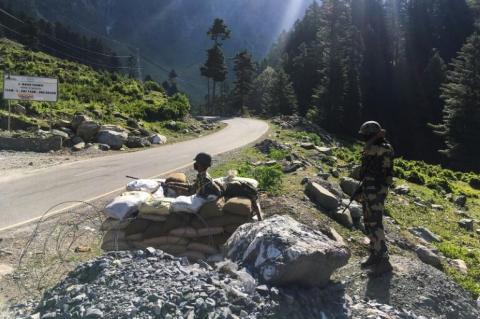 Twenty Indian soldiers were killed during "hand-to-hand' fighting with Chinese troops in a disputed Himalayan region, India's military said, the first deadly clash between the nuclear powers in decades.

Both sides blamed the other for June 15's violence, which followed weeks of rising tensions over their competing territorial claims, with thousands of extra troops deployed.

The clashes reportedly involved intense fighting and no gunfire, in line with longstanding tactics to avoid a full military battle over the disputed 3,500-kilometre (2,200-mile) border.

An Indian army source told AFP there was no shooting but there were "violent hand-to-hand scuffles".

The fighting occurred in the precipitous, rocky terrain of the strategically important Galwan Valley, which lies between China's Tibet and India's Ladakh.

The soldiers threw punches and stones at each other, with Chinese troops allegedly attacking their Indian counterparts with rods and nail-studded clubs during the more than six-hour fight, the Hindustan Times reported.

India initially said three of its troops had died, and that there were "casualties on both sides".

But in a statement late on June 16 the army added 17 more critically injured were "exposed to sub-zero temperatures... (and) succumbed to their injuries".

China's defence ministry confirmed the incident had resulted in casualties but did not give the nationality of the victims or any other details.

Both sides gave competing versions of the violence.

The number of dead is rising, the peak of the infection is approaching, WHO to react

Dalai Lama is Admitted to Hospital

10 Celebs Who Were Banned in China

The weirdest airports in the world (photos)