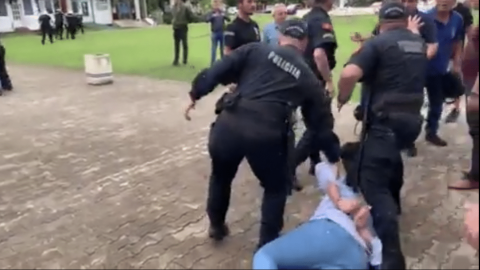 Media reported that at least five local councillors were arrested. Hundreds of citizens gathered in front of the municipality building to protest the arrest and what they called "police violence".

"We didn't have this kind of occupation even during the time of the greatest occupiers in this area. We respect the laws of this state, and there is no need to use force," Carevic told the media before he was arrested.

In a press statement issued after the arrests, most the of the opposition parties reacted sharply, alleging that police behaved brutally on the orders of the government in Podgorica.

The arrests came after weeks of tension in the wealthy tourist hot spot between the local authorities, represented by the main opposition parties at national level, and the Democratic Party of Socialists, DPS, which has run Montenegro for almost three decades.

The ruling coalition that won the elections in Budva in 2016, led by the opposition Democratic Front and the Democrats, had refused to hand over power after one of its councillors switched sides to support the DPS, which is headed by Montenegro's veteran leader, Milo Djukanovic. As a result of this move, the opposition-run local government lost the majority in the assembly.

On June 11, the new DPS-led majority dismissed Carevic and Radovic and elected a new mayor and chief of the local assembly.

Carevic accused them of forming a new majority through political corruption, and on June 12, Radovic...