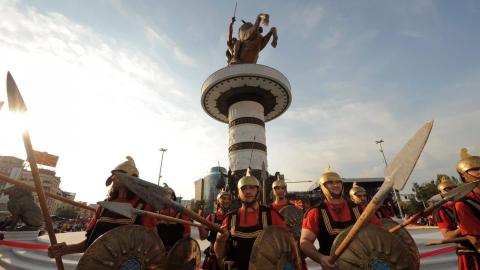 The newly independent republic's initial choice of name, Macedonia, ignited a decades-long dispute with Greece, blocking its path into the European Union (EU) and entangling its destiny in questions of identity and ancient history.

The dispute was officially settled two years ago on June 17, 2018, when the leaders of both countries ratified the Prespa Agreement, so called after the lake whose shores hosted the signing ceremony.

The name, North Macedonia, was agreed as a compromise to soothe Greek fears that its northern neighbour had territorial designs upon its north-western province. The people of North Macedonia meanwhile retained the right to refer to themselves and their language as "Macedonian".

Most importantly, Greece ended its opposition to North Macedonia's long-stalled application to join the EU.

The signing of the Prespa Agreement in June 2018 marked the culmination of years of diplomacy. Photo: EPA-EFE/NIKOS ARVANITIDIS

Among other provisions, the Prespa Agreement envisaged the formation of a joint commission to review aspects of the history curriculum in each country that are disputed by the other. Over the last century, similar bilateral commissions have helped France and Poland reach agreement with Germany on the teaching of their shared, troubled past.

This story by BIRN, based on interviews with historians and commission members, examines how differences over the distant past have been caught up in the currents of diplomacy in the Balkans. Most of these...

Sarajevo Film Festival to Go Ahead Despite COVID-19 Threat