Prayer may be performed in Hagia Sophia 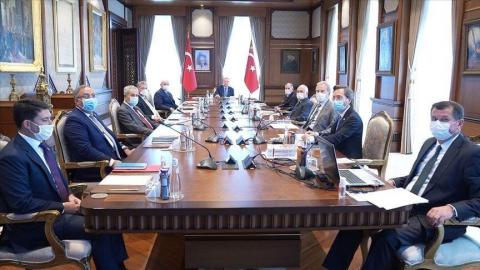 The issue of performing Islamic prayers at the Hagia Sophia next month was discussed at a meeting of the High Advisory Board of the Turkish presidency, as the status of the landmark historical structure is a widely debated subject in local politics.

During the meeting of the advisory board, chaired by President Recep Tayyip Erdoğan on June 16, the idea of performing prayer after the Council of State's ruling for Hagia Sophia was floated.

"God willing, we will perform a prayer following the Council of State's decision on July 2", Erdoğan told the meeting.

Attendees also proposed that the prayer could also be performed on July 15, which marks the anniversary of the botched coup attempt in 2016.

Erdoğan already said that his government will take necessary action concerning the opening of the Hagia Sophia to worship in line with court's ruling.

The Council of State is currently examining the request for annulment of a cabinet decree of 1934 that turned the Hagia Sophia from a mosque into a museum. The court is expected to announce its decision on the Hagia Sophia's status in early July whether the site can be converted into a mosque.