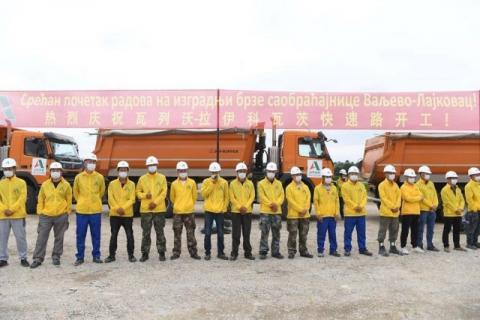 Vucic said that this is important for Valjevo, Lajkovac, Mionica, but also the entire Kolubara district.
He stated that by the end of 2022, it is realistic to complete the works on the road and watercourses.
"When we went to the west of Serbia earlier, the question was when the highway would arrive, when we opened the sections of the 'Milos Veliki' highway, the key question was always what will we, the people of Valjevo, do, where are we. We are starting work today. The Chinese company Shandong is working on the section from Lajkovac to Valjevo. The road will not go through the center of the settlement, and the riverbeds will be arranged, so we will no longer have the problems we had in previous years," Vucic said.
He stated that he will invest a total of 150 million euros, which includes the regulation of watercourses. "Shandong will also work on the regulation of watercourses. Everything must be completed in two and a half years," Vucic said.
"When the pandemic passes, we expect Serbia to be even more interesting, and for EU countries, primarily because production costs and a good workforce are more accessible than anywhere else in Europe," Vucic said.
"The road of 18.3 kilometers seems like an easy task, but there are two and a half kilometers of bridges," said Vui and added that in two and a half years we will have a de facto highway Valjevo-Belgrade.
The plan is, as he said, for many people from Valjevo to return to their hometown, to work and live there to the same standard as the people in Belgrade.
"The Valjevo-Belgrade road, even if you drive the slowest, will take less than an hour," the president said. "Finally, the connection between Valjevo and Belgrade was made in the best and fastest way," Vucic added.
...