Dendias: Greece open to dialogue but not under threats 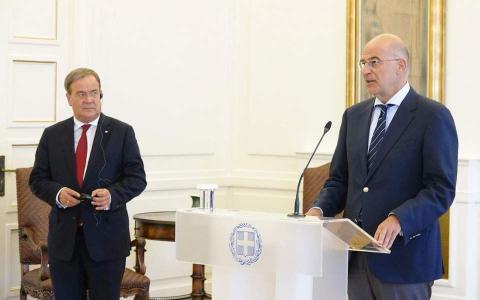 Greece is open to a dialogue with Turkey but not under threats, Greek Foreign Minister Nikos Dendias said on Monday, adding that any talks must take place "in the framework of international law, the international law of the sea and good neighborly ties."

Dendias stressed that Greece's only dispute with Turkey concerns the delimitation of the continental shelf and exclusive economic zone (EEZ).

His comments came after a meeting in Athens with Armin Laschet, premier of North-Rhine Westphalia, Germany's most populous state, during which he briefed the conservative governor on Turkey's escalating provocations.

The two, the Greek foreigm minister said, furthermore discussed recent developments in the Eastern Mediterranean, the Libya crisis and migration.
Talks also centered on the social and economic repercussions of the coronavirus outbreak and the outcomes of...