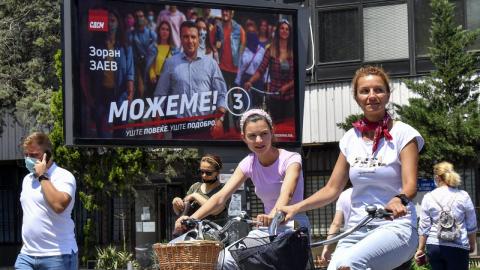 Talks on forming a new government in North Macedonia are expected to begin on Tuesday when the constitutive session of the new parliament is held.

The session follows the July 15 early general elections in which the Social Democrats, SDSM, led by Zoran Zaev, won a narrow victory over their rivals in the right-wing VMRO DPMNE party, creating uncertainty over who will be able to assemble a majority in the chamber.

First to get that chance as Prime Minister-designate will most likely be Zaev, who was Prime Minister until early 2020. His party won 46 seats in the 120-seat parliament, just two more than VMRO DPMNE, which won 44.

The Social Democrats said they plan to start formal talks with potential partners immediately after the constitutive session when their leader, Zaev, returns from a vacation he took after the election.

They have meanwhile rebuffed speculation that a deal between them and their old coalition partners, the mainly ethnic Albanian Democratic Union for Integration, DUI, has already been made.

According to this theory, the Social Democrats would hold the prime ministerial position for three years and the DUI would appoint a PM for the last, fourth year of the government term, to meet their pre-election demand for the country to have an ethnic Albanian prime minister.

Both the Social Democrats and the DUI have denied this speculation, insisting that their previous contacts had been informal and they had not discussed such a proposal.

Together, an alliance between these parties would control 61 seats - the minimum needed for a majority, though observers do not exclude the potential inclusion of a third partner to strengthen their base in parliament.

At the elections, the DUI won 15 seats while its...