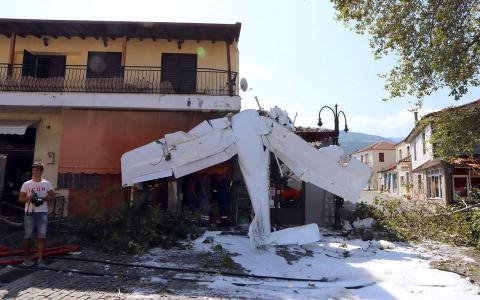 The pilot of a single-engine plane was lightly injured on Monday morning after his aircraft crashed on a coffee shop in a village of northern Greece.

The house was empty when the accident happened. The incident happened in the village of Proti, in the regional unit of Serres, central Macedonia.

The 19-year-old was flying with the Cessna for some time at a low altitude over the village when one of the plane's wings hit a tall tree, according to information cited by state-run news agency ANA-MPA .

The teen lost control of the plane and fell. He was transferred to the General Hospital of Serres to receive treatment for light injuries, the report said.

Stelios Frastanlis, the mayor of Amphipolis - the municipality to which Proti belongs to - told ANA-MPA that the young pilot is from the village and that there is no intention on the part of the municipality...